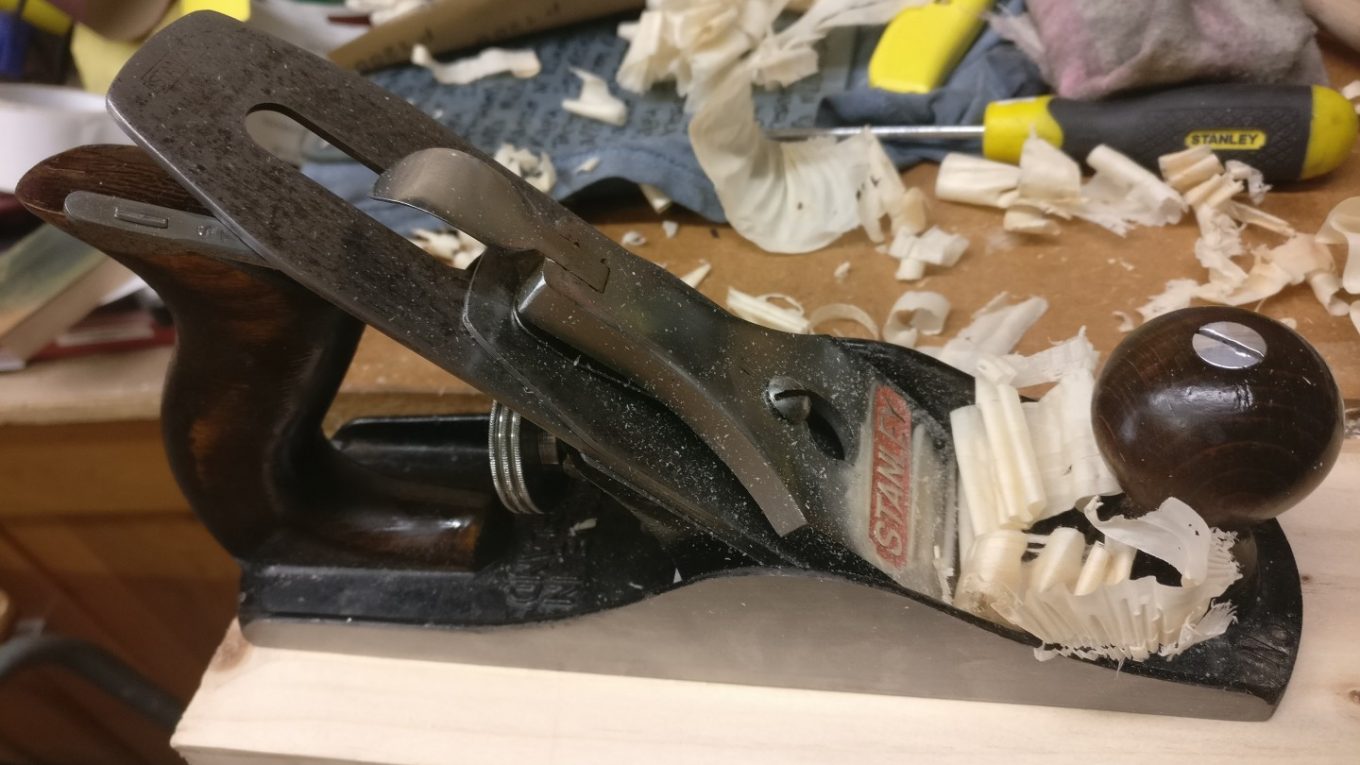 Unlike the other page I have about technical tools I use in my professional life as a software engineer, this page concerns some of the hand tools I’ve used for woodworking and other practical hobbies that I can recommend.

Many of these were recommended to me by The Internet (specifically experts such as Paul Sellers) so I can’t take much credit for “discovering” them.

I have a restored Stanley No 4 plane and a Record No 5 plane (which barely needed any restoration) which I bought from eBay and followed Paul Sellers’ video on how to restore them.

Paul Sellers doesn’t seem to think much of Irwin “Marples” chisels, as far as I can tell mainly because they’re not the same as the Marples of old. I bought a set of five (6, 10, 13, 19 and 25mm) “M444” chisels (these are the ones with the solid plastic, not rubberised, handles) on Wranglerstar’s recommendation* and they seem to work well. I happened to have an unused but old CK “Marples blue chip”-style 16mm chisel which came from my grandad (I suspect another flea market purchase) which fits nicely in the gap in my set and as far as I can tell the Irwin and the CK chisels perform just as well as each other.

(*Disclaimer: Wranglerstar’s tool and woodworking videos can be very informative, though he expresses some views on other subjects on his Youtube channel that I very much disagree with and do not endorse at all).

Here is one area where I deviate from Paul Sellers’ practice.

I sharpen my tools using oilstones. For chisels and narrow tools I have a grey manmade double-sided coarse/fine stone which I inherited from my maternal grandfather (he probably bought it at a flea market he frequented). No idea who made it. After cleaning it off with some white spirit it works fine – it is slightly dished, but as Paul points out, that isn’t a problem.

For plane irons, I wanted a wider stone. I contemplated buying the diamond plates that Paul (and many of his ‘followers’) use, but they are very expensive (over £200 for his full set of three) and by some reports don’t last too well. I bought a set of three (coarse/medium/fine) Norton India 8×3″ bench stones for £70 from Classic hand tools and they work great – for touching up I only use the fine stone and then strop. I’m taking care to use the stone evenly, and since these are double sided I can keep one side reserved for when I need a flat stone (flattening the backs of irons and chisels).

I lubricate the stones with baby oil. It’s cheap (around £1 for 300ml in supermarkets) highly refined mineral oil with just a bit of perfume (watch out though, some brands also contain other moisturisers, so avoid them – I’ve been using Asda’s own brand). And presumably it’s good for the skin since that’s what it is designed for. Alternatives like 3-in-1 oil seem much more expensive, and while other people advocate alternative oil-based products such as diesel or kerosene, both stink and I don’t really fancy having them on my hands.

I created a Paul Sellers style strop which I use after the oilstones. I bought a bag of leather offcuts from eBay for a few pounds (from a place that makes leather furniture) and found a large enough piece for the strop. I started using Silverline green compound that Paul recommends, which worked well enough. A while later I bought a metal polishing kit for my bench grinder, which came with an assortment of other bars of compound, and I tried the white “stainless steel” compound on a strop and it seems to work much better (a shinier more mirror-like finish) than the green compound, so for now at least I’m going to switch to that. I may change my mind later.

I made a Paul Sellers rag-in-a-can oiler (using a small sweetcorn can, so a little smaller than Paul’s baked bean/tomato can). I loaded it with baby oil (see above, much cheaper than 3-in-1) and it works well.